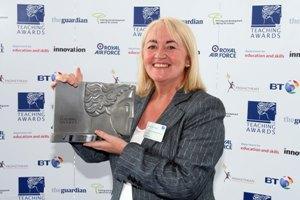 This is what the judges had to say...

Helen is a woman who will stop at nothing to get the best for her pupils. She has demonstrated tremendous tenacity and spirit is creating Cranmore Integrated Primary School, even when the odds of success appeared doubtful. With her vision, dedication and energy - and a small band of committed parents - Helen has proved herself to be an exemplar of integrated education and in 13 years has developed a flourishing school that caters for pupils from all religions, cultures and social backgrounds.

In local terminology Helen would probably be called something of a chancer, unfazed by red tape, bureaucracy or status. She is not unfamiliar with bombarding government departments with phone calls to lobby for what she wants, and even recruited a previous Secretary of State, Mo Mowlam, to help in her quest for funding. Helen has sought charitable backers practically the world over, and secured the first pre-school unit with donations from the United States and Canada totalling more than £80,000.

Her passion and commitment to education is legendary, and from a school roll of just 37 pupils in 1993 Helen now leads a team that delivers high-quality education to a full complement of more than 200 children. With nearly a third of the pupils having special educational needs, Helen has been determined to give them the best facilities possible, and once again her powers of persuasion have triumphed in the development of a Nurture Room, possible through private donors who have admired and wish to share in one very special educational experience.

Helen spurs on her team positively encouraging personal development in all her staff. Over the last two years, alone four teaching assistants have gone on to teacher training courses and two teachers are completing Masters Degree in special education. Spotting the talent and potential in others is just one aspect of Helen’s unremitting quest to bring a top quality education to her community.